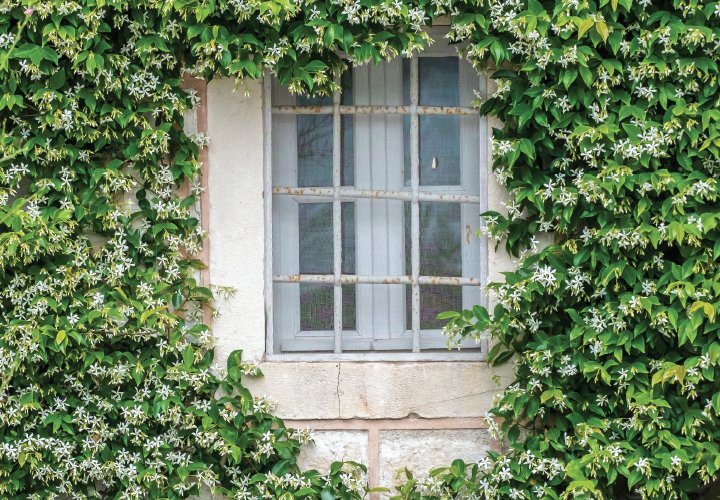 Perhaps you’ve watched those charming BBC murder mysteries where all the victims live in sweet, vine-covered cottages with picket fences and mullioned windows. Or you’ve toured England’s Cotswold or York districts and wandered beneath trellises overflowing with vining roses and dined at a picturesque pub with trumpet vines and English ivy screening the parking lot. How do the English coax those rambling roses, wisteria, and ivy to behave so well, dripping blossoms, and weaving gracefully above windows and porticos?

There’s a wonderful, old book by Roy E. Biles entitled The Complete Book of Garden Magic, copyright 1935. First, I love the arrogance; Roy is certain he’s covered it all! Everything one needs for a memorable garden can be found within the covers of his book. (If only!) But I digress. In the section of Biles’s book dealing with vines, he says, “Vines have a place in garden decoration that cannot be taken by any other plant. They have the ability to produce a large quantity of flowers in the minimum of space and to hide or soften ugly materials or outlines.”

That pretty well sums it up. 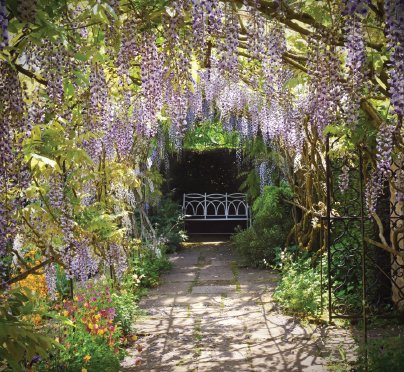 But, the idea of planting vines in our gardens has tended to be received with dread, or at least hesitancy. Visions come to mind of kudzu choking out vast tracks of woodland or fat and fuzzy poison ivy slithering up trees. But Roy and I are here to tell you, “Never fear!” A lush wisteria can be trained to drape and float across the arbor near your deck. Disguise your neighbor’s unsightly chain-link fence with trumpet vines; their shiny, dark green leaves will cover the rusty metal quickly, and you’ll be delighted with the four-inch long, red, orange, and yellow trumpet-shaped blossoms from June to September.

As one element of your garden, vines are useful and relatively carefree. Wherever you need a bit of softening or filling-in, there’s probably a vine that will work. If there’s an unattractive architectural feature that can’t be removed, disguise it with trellised vines. While most vines wind their way into your heart slowly, growing three or four feet every year, some annual vines, like morning glories, gourds, and even pumpkin vines can provide a quick rescue. You can pop them in behind the spindly, young lantana you’ve just planted. The morning glories will bloom and vine around that section of the garden, providing color and interest while the spindly lantana settles into its new home. At season’s end, the morning glory vines can be removed easily and the area cleared so that in the spring the maturing lantana can take over its area unencumbered. How much more interesting to have had a summer of blossoms greeting the morning than an awkward, young plant sitting forlornly in the garden. 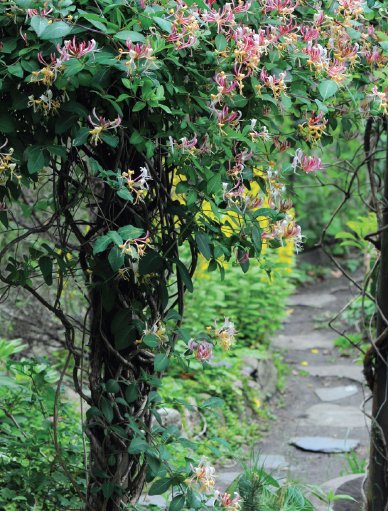 Color: For example, if you’ve cultivated a lavender garden, the perennial climbing hydrangea will fill its allotted space with purple-fading-to-blue or pink blossoms from June through September. Climbing hydrangea takes care of itself in our zone, and its reddish stalks add interest to the winter garden. Of course, perennial clematis vines are popular in our region, and you can choose pale lilac or deep purple blooms to delight you all summer long.

FOLIAGE: If you’d rather not have the distraction of blossoms, but want lush foliage as a filler or camouflage, Boston and English Ivy are popular choices. They grow well in Zone 7, our climate range. Looking for something a bit more distinctive? The green leaves of the Virginia Creeper, a lover of full sun, turn bright red and gold in autumn. If it’s springtime greenery you’re seeking, the hardy Kiwi Vine can be a show stopper. I can’t guarantee you’ll reap a harvest of kiwi in the fall, but the vine puts out its small, spade-shaped leaves quite early in the growing season. Those leaves capture the early springtime sun and dazzle us as tiny fluttering sun catchers.

FRAGRANCE: Is there anything more delightful than the sweet or spicy fragrance of a favorite flower or plant? If you enjoy those olfactory surprises wafting in the open window or greeting you as you settle into that hammock, then planting fragrant vines here and there may be a wonder-filled delight. Honeysuckle springs to mind. There’s the golden trumpet variety and the Dropmore Scarlet honeysuckle. This variety produces a pretty, red berry in the autumn. Their heady fragrance attracts not only the gardener and guests but the hummingbirds and butterflies as well. Another heavenly producer of scent is the Star Jasmine. According to legend, 19th century herbalists recommended jasmine against headaches and migraines. And you can train a vine to encircle your bedroom window, wafting healing fragrance your way as you sleep. I can’t leave this topic without a nod to the queenly wisteria vine. Both fragrance and lush blossoms are hallmarks of all varieties of wisteria. This splendid vine will drape over anything and provide beautiful, lavender clusters of flowers and lush foliage throughout the growing season.

CAUTIONS: Now, perhaps, I’ve piqued your interest, and you’re thinking a vine or two might be just the ticket. I’m going to point out a few considerations when planting perennial vines. (No need to worry about the annuals.) The key terms here are rhizomes and tendrils. Some vines, wisteria for example, are clever reproducers. Not only do they produce graceful, slender seedpods in the autumn. They also send out rhizomes. Rhizomes are strong roots that travel just below the surface or even just above ground. They travel until they find a new host–a tree or fence or structure. Once the rhizome encounters the vertical support, they begin to rise–up, up, and around. Your gardener or you will need to remain vigilant for runaway rhizomes. Chopping them out won’t suffice. They’ll produce new vines from each broken place. You’ll need to either dig up the rhizomes or use a strong weed killer if you want to contain these over-zealous travelers.

In addition, vines climb, and to do so they need some method to hold on, lacking fingers as they do. And so, some varieties of vines have developed tendrils. These pretty, hardy cords of green attach themselves to surfaces, such as brick and stucco, and make their way up and across the wall or fence. These tendrils are pretty—sweet pea vines are notable for their tendrils. However, if not kept in check, the tendrils will insinuate themselves into crevices, rooflines, eaves, and windowsills, where they’re definitely not welcome. 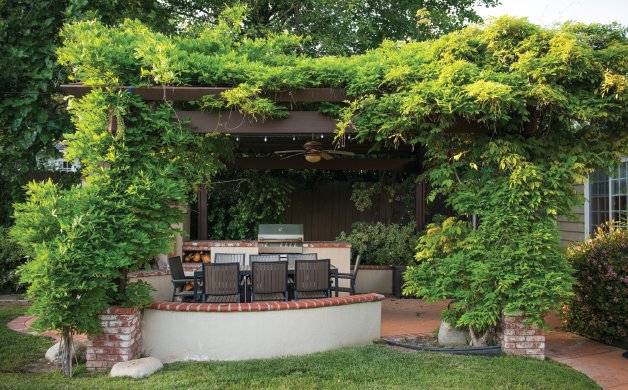 Retaining Control: Don’t be dissuaded from your plans for lovely vines in your garden. There is a fairly easy solution—easy to implement, but tough to maintain. The remedy for the wandering vine is pruning. Vines need very little maintenance, except for one thing, pruning.

There are two goals for pruning. The first is to train your vine to grow around or over some specific thing—around a window or over a trellis. A pair of scissors can snip off the thin, green tendril-explorers, enabling you to train the vine to grow around a window or along a fence. The second goal is to limit and contain where your vine grows. You or your gardener must remain vigilant throughout the growing season. Cut out rhizomes and snip off tendrils that are headed in the wrong direction or, in the case of those rhizomes, any direction at all. Don’t let them get away from your control.

Fragrant, colorful, lush vines can add to your garden’s glory. They will repay the attention you give them with stunning displays of color and heady fragrance.

I am a writer and educator.
View all posts by J. F. Booth →
This entry was posted in Uncategorized. Bookmark the permalink.