October is upon us with rustling leaves and vees of geese, calling as they pass overhead.

Our dear ospreys too have taken flight.  Oscar and Opal left in mid-September, accompanied by their two well-fledged offspring.

But not before one more summer misadventure!

As you may recall, our friends had a tough time building their nest last spring.  What had, in years past, taken two or three days, took Oscar and Opal two weeks this year, on the new, precarious LED light post.  Their persistence, — not giving up when light-post one, then light-post two failed to hold their nest, paid off in the third attempt!

It was a far less elegant nest than in years past, as you can see, but a nest none-the-less.  And it held fast as Pearl laid her eggs and cared for her two hatchlings. Pablo, ever the devoted dad, shared the parenting duties; guarding the family from the crows and seagulls, bringing live fish for the chicks, shoring up the nest with more vines and branches throughout the summer.

As the summer passed, I watched the two little ones fledge and take off across the Severn River on their first tentative flights – with Mom or Dad circling just above or just behind.

You may recall the three young osprey that had taken over the far soccer field.  They arrived about the same time as Pablo and Pearl, but the three seemed young and carefree. None of that nesting business for them.  I would see them fishing or perched atop light poles carefree, watching the the morning unfold. They avoided Pablo & Pearl’s football field territory, but seemed to share the river fishing grounds without any conflicts.

This languid, 16th summer was not without its own drama, however.  As I walked my usual route along the Naval Academy seawall one early, August morning, I saw in the distance the three adolescent osprey flying frantically around and across the football field, where they did not belong.

My first thought, “Oh, those young ones are challenging Pearl and Pablo’s territory, causing a bit of a dust-up.”

But, as I approached the far side of the field and looked up and across at the nest, I saw that both Pearl and Pablo were at their nest, Pearl on the pole just to the south of the nest and Pablo at the nest. (The female osprey is larger than the male, and that’s how I distinguish between them.) The younger osprey still flew hither-and-yon, sometimes calling out, but mainly just flying about, circling the nest area.

As I approached, the noise grew louder.  I could hear the distinctive pinging call of the osprey… but there was another, more frantic sound pitched high, above the other birds’ calls.

Then I saw her!  Hanging upside down from the nest, wings flailing, screaming for help, was one of the fledglings!  I stopped and watched in terror as she beat her wings helplessly, twisting her body, screaming in terror.  I could see her head and beak, her one leg and talons extended into mid-air, and the other leg… I could only assume it was caught tightly in the vines and twigs of the nest.  She must have tried to fly from the nest, and inexperienced as she was, her talons caught on something, and she spun down and hung helplessly in the air. 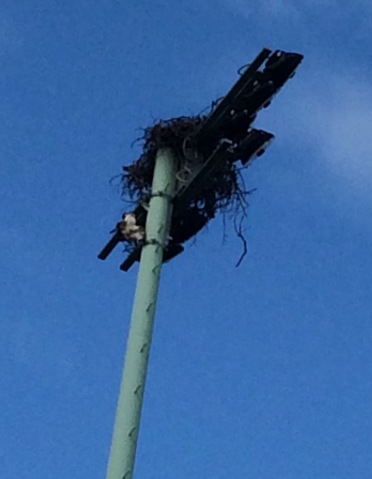 Obviously, Pablo and Pearl were trying desperately to convey some advice, offer some support for their young one as she fought for her life.

And, the three, young, neighbor osprey joined in the drama, offering whatever support they could. (Or, a less generous interpretation: waiting to see what would happen next.)

After watching the swinging, flailing bird struggle helplessly to free herself, and after listening to the heart-wrenching calls of the parents, I had to leave.

As I walked on I thought that when I returned to this spot tomorrow I would see a swinging carcass or the bird’s remains on the pavement beneath the light post.

Next morning, I approached the football field reluctantly, not wanting to learn the conclusion to the sad drama I’d witnessed the day before. From a distance all seemed  quiet. I didn’t see the three teenagers, nor did I see the osprey couple or the surviving fledgling. Had they all fled the area after the tragedy? Would they abandon the nest after all?

I steeled myself as I rounded the end of the football field and the nest came into view. I tipped my head back and looked up…  NO CARCASS hanging from the nest!  I walked closer, expecting to see the remains somewhere below.  Nothing!  There was no dead body!

How could that be? Had some turkey buzzard carried off the remains?  The seagulls might have feasted on the poor, dead bird, but there would be feathers, bones, something left behind.

I walked on, puzzled.

On the second day after the terrible dangling, I saw two osprey fishing over the river as I approached the football field. And, on the nest, Pablo seemed to be fussing with… the surviving fledgling? But, I thought I saw two heads peek over the nest’s edge.  Could it be?

I was not going to let my Pollyanna proclivities rule the day!  I walked on, glad at least to know that Pearl and Pablo had not deserted their nest, though they must be plagued by sad memories of their chick’s demise.

Over the next days and weeks I watched carefully.  I saw Pablo and Pearl continuing their task of preparing for summer’s end and their departure.  Training the fledglings for independence is a serious matter for all parents, and Pearl and Pablo have been accomplishing this task every summer for 16 years. And this summer was no exception.

Two hungry fledglings were learning to fish under the watchful eyes of their parents. Two noisy chicks demanded food from their returning parents.  Yes, two; somehow, during that terrible morning, Pearl and Pablo succeeded in rescuing their young one. While I would have thought it could not be saved – freed from its vines, it would have plummeted head-first to the ground before it could take wing!  Or, somehow righted into the nest, its leg and talon still caught, the young bird would not be able to free itself to fly again.

But, I was wrong!  She was freed; she flew; she survived right along with her sister osprey. So that by the time I said good-by to the family in mid-September, four beautiful, strong birds set out from the Academy’s field, enroute to whatever warm, lush winter home they may know.

The nest is empty now, but each day as I walk by I still think of that dramatic morning and its happy ending.

And, speaking of happy endings…

I am a writer and educator.
View all posts by J. F. Booth →
This entry was posted in Adventures, Life Lessons, Nature. Bookmark the permalink.